Between the 17-19th of February, the focus of North America’s Hungarian folkdance world was relocated to Île-Perrot, not far from Montréal. Over 100 dancers gathered here from all over North America to dance together, learn the dances of Szászcsávás and last but not least, to carouse. 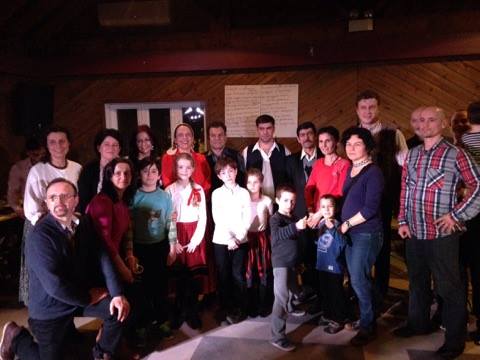 The Bokréta Ensemble celebrates this year its 50th anniversary. The members of the ensemble – besides Hungarian dancers – are mostly French Quebecers, so the fact that they sing perfectly in Hungarian is even more creditable. The group works on such a high level that by regular practices, performances, visits to Hungary and Transylvania they can participate in regional festivals overseas and learn new techniques locally, also.

The workshops were lead by two teachers from Hungary: Hortenzia Lőrincz and István Hahn-Kakas, besides them a populous group of artists has arrived from Szászcsávás: three members of the Gipsy band from the village of Csávás that was joined by Levente Fazakas, and Montréal folk musicians Levente Garda, Attila Krasznai and Sergiu Popa.

Most of participants arrived in the afternoon of 17th, and occupied their accomodation. The táncház (dance house) of the evening lasted until dawn.

The next day, daytime workshops were held, where participants could learn the Hungarian dances of Szászcsávás. But the peak of the weekend was just about to come now, namely the Csávás Ball. As a warm-up, the táncház for children has opened its doors at 7 PM, then the guests of the Ball arrived as well.

Csávás Ball was opened by the concert of the virtuousely playing musicians. They performed a spellbinding set of Hungarian, Rumanian and Gipsy songs to show the unbelievable cultural variegation of Küküllőmente region of Transylvania.

The music performance was followed by the breathtaking show of Bokréta Ensemble, they presented a flamboyant choreography from Kalocsa. The audience’s reply was an uneasing applause, and shortly almost everybody has hit the dancefloor in the táncház. It started with the common teaching of the basics of Hungarian dances from Szászcsávás, then we danced ’lead dances’ to which ones even absolute beginners could join. Being Carnaval (farsang) time, venturesome dancers were wearing different costumes, that the jury considered at the fancy dress competition. Teaching was followed by free dance and revelry until early morning.

The Csávás Ball was run with an absolute full house, almost 200 guests, in an amazing atmosphere. Hungary’s ambassador to Canada, Dr. Bálint Ódor and Dorottya Deák-Stifner cultural attaché marked the event by honouring us with their presence.

Last day of the camp was fulfilled with workshops, and at the evening a closing táncház awaited the unwearying participants. During these 3 enriching days we all have learned a lot, and the teachers from Hungary stayed after for a whole week to teach a brand new choreography to the legendary Bokréta Ensemble.